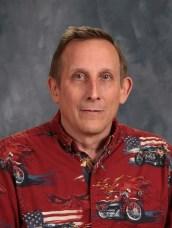 During his junior year at Fort Zumwalt, Mr. Hesskamp became the school’s first ever state champion in wrestling. He then followed that up with a second state title his senior year. During his last year of high school he also attended Lewis & Clark Career Center and then continued on to Ranken Technical College where he became trained as an HVAC technician.  Following graduation from Ranken, Mr. Hesskamp became a journeyman HVAC technician and a member of the Pipefitter’s local 562.  He worked for a local heating and cooling company before venturing out on his own for 20 years as owner and operator of Hesskamp Heating and Cooling.  For the last 20 years, Mr. Hesskamp has been teaching HVAC to St. Charles County juniors and seniors at Lewis & Clark. He holds numerous certifications and has helped launch dozens and dozens of HVAC careers in the area.

During the warmer months of the year, Mr. Hesskamp enjoys boating and fishing during his time off from school.  In the winter he likes woodworking.  He and his wife Joan are proud of their two children and enjoy visiting their  two grandchildren in Chicago.

“I enjoy getting to know my students and helping them grow in this field.  It’s satisfying to see them find a good career for themselves and for their future families.”